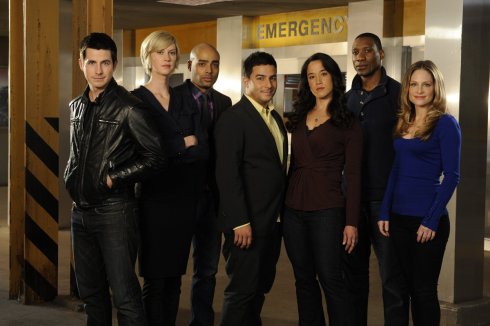 Welcome back everyone. It’s great to be back.

I want to apologize for the big delay in writing about this episode.  And I’m fully aware that I have one more to do before tonight’s new episode, but things have been very hectic for me lately.  I’m hoping to be all caught up in the next couple days.  I will have my thoughts written on last weeks episode hopefully by tomorrow night.  Again, I’m sorry for being late with this one.  So let’s get started. 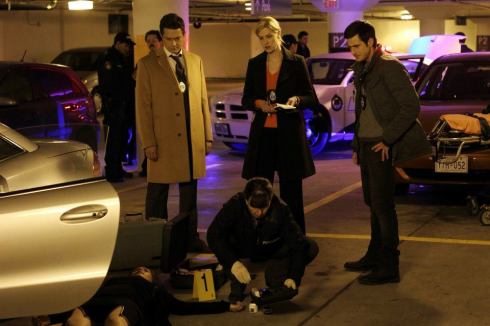 Well within the first five minutes we have a murder. A very well known woman who’s worth millions. Motif??? We will see, but money does bring out the worse in people.  What impressed me though was the fact that when Michelle and Toby went to questions the husband, he said that he was here in Newfoundland.  That he just flew back that day.  But that he actually pronounced Newfoundland properly.  A lot of the times, people will say it as they see it. New Foundland is one.  That drives me nuts.  So the fact that both the husband AND Dev could say it right, made me smile.  Bless yer cotton socks, 🙂 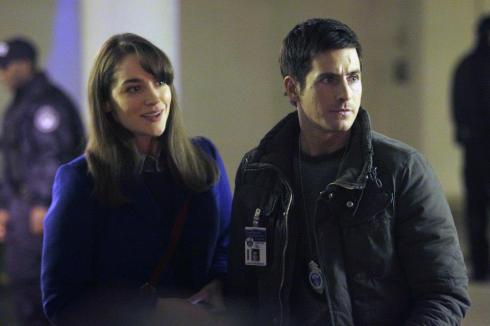 Now toss in a new person into the mix.  One that intrigues Toby, and you have a recipe for mystery.  This episodes introduces a new character.  One that has Toby fascinated by.  Not to the point that she’s always popping up in places where everything was hush hush, but that he can’t read her thoughts.  Which makes me wonder.  Is she like him and can sense who he is?  Or she knows that he has a gift and found a way to block him.  Either way, this seems to pose as a new arc for the show.  Maybe a new love interest.  We’ll have to see.

One of the things that impressed me the most, and I was slightly shocked when I heard it too.  Was when Michelle and Toby went to interview the husband and he had told them that he had business in Newfoundland, and that he just got back from there.  Well he actually pronounced Newfoundland right.  I was like,,, “wow, he said it right.”  And not just once, but he said it again.  Then Dev had it in his line a little after that.  Though, I do have to wonder if they practiced saying it or were they lucky.  LOL.

Then we have Oz saving the life of a big time TSN broadcaster.  I’m not into football, but get on the topic of hockey and I can curse with the best of them.  Though, I may not know the player’s names, but I do get all roiled up when I do watch a game.

This meeting prompted Glen to offer two tickets to the game.  From which Oz was so excited to get them, but knew he couldn’t accept a gift for doing his job.  In the end, they came up with a way he could accept, but through a third party – Toby.

It was later that day when Oz met up with Toby at their usual hangout that he handed Toby a gift wrapped box.  Toby opened it and was so excited to see what it was.  Though, Toby being Toby, he couldn’t pass up a chance to freak out Oz.  It was at the same moment when Tia joined the boys.  Leaving Toby to say that he would like to take Tia.  Though he didn’t come out and say, he motioned his head towards Tia.  The look on Oz’s face was priceless.  Letting Oz look so disappointed, that’s when Toby told Oz that of course he’d love to take his best friend.  The look of relief was funny.  Poor Oz was sweating.  LOL.

I love this pairing.  Oz and Sandy make a great couple.  I hope it gets stronger for season four.  When Sandy went to Africa during the beginning of the season, first I thought, oh oh.  But when she came back I was so happy.  I know that with Sandy already having a failed marriage, she’s going to be cautious who she gets close to.  But Oz is the perfect match for her.  Plus, she helped tame him down too.  Which was very nice to see.  Go Team Sandy & Oz!!!

It’s too bad these two didn’t work out.  But I’m glad that they were able to remain friends when their relationship went south.  Toby and Olivia were so cute together.  In this part, Toby went to Liv and told her that there much be something wrong.  He came across someone that he can’t read.  When Toby told her it was a woman reporter, Olivia kinda smiled.  But to ease Toby’s mind, she set him up for a small assessment.  But everything worked fine.  Toby was able to read every thought Liv put out.  After Olivia gave Toby a good bill of health, he went on his merry ole way.

Again, sorry for the very late posting of this episode.  I hope you can bare with me as I try to catch up.

Thank you for popping by and reading my thoughts on IN THE KNOW.  Please feel free to leave a comment on what you thought.  Plus you can share this by clicking on the buttons below.  You can also nab me on Twitter by clicking on my picture on the left.  Until next time. XO

Welcome back THE LISTENER fans.  And welcome to FLASHPOINT fans. 🙂

This episode was anticipated by everyone as a MUST SEE!!!  To have this type of crossover was nicely written.  Although, before the airing of this one, I was thinking that it was going to be a mesh of both cast members for the whole episode.  I guess I’ll have to start tuning into Flashpoint to see more of Spike, lol.  It was still cool to see.  Though now all the fans are wondering when it will be reverse. 🙂

Anyway, that’s my initial thoughts, now onto the reason why you’re here.

This is the start of it all.  Magnus heads into a “secured” room with his lawyer.  Apparently he’s been through a lot of lawyers, so maybe this one will stick with his case.  But looks can be deceiving.

This was funny how these two got paired up.  I couldn’t stop giggling when Oz was chatting with Toby about how they missed the good ole days.  They were discussing on who was Bonnie and who was Clyde.  It wasn’t until Ryder came in the middle of the conversation that Oz learned that he was going to ride with him.  I was hoping he was going to say Toby.  I miss those two driving around the streets of Toronto with their typical conversations.  The look on Oz’s face was priceless. 😀

Magnus Elphrensen (guest star Peter Outerbridge) breaks out of prison with a little help from his lawyer.
Photo by Stephen Scott.

Now, this was the sneaky part.  How the devil did Magnus manage to change his appearance with the cameras pointed right at the meeting?  It wasn’t until Michelle and Toby were able to go in the room and take a look around.  That’s when they noticed a gadget attached to the wall next to the camera.  It was cleaver, but stupid.  Or was it?  Maybe they left it there hoping that it would be found.  Magnus knew that Michelle would be on the case anyway.  He’s the best bad guy to have on this show.  It really had you thinking along side the IIB team as to what Magnus was thinking.

This was cute.  They work nicely together.  Even though they had some awkward moments with Oz babbling, but in the end Ryder gave Oz a complement about his tactics while on the job.  As much as Oz loves to joke around, he got it where it counts.  And Ryder told him as much.

Now this was the moment we were all waiting for.  To see someone from the Flashpoint series make their appearance.  And what a cutie too.  I’m with Sandy on this one, a guy in this type of uniform,,, yummm. 😀 And yes, I’m married, but there’s no harm in looking, 😉 LOL.

What I liked about this short encounter was the fact that Spike told Ryder that if you were ever in a jam, that Oz was your man.  He’ll always have your back.  Always keeps his wits about him in any situation.  I think that made Ryder rethink some things on Oz in two aspects – Oz as an employee and Oz as a person.  I like them both, 🙂

Meanwhile, Michelle and Toby had a chat with the “lawyer”, who ended up being a fellow inmate.  Hoping that Magnus might have slipped up and said something to him, they questioned the inmate.  Unfortunately, Toby wasn’t able to get a reading they wanted.  So back to the IIB they went and done more searching.

Michelle knew that Magnus never gave up his revenge on the guy who killed his daughter.  But what I found to be the most clever part was the fact that Magnus basically had the IIB get the information that he was missing.  Now that he knew where Gregory Harrow (Kristopher Turner) was residing, he left to pay him a visit.  Of course that’s when Dev informed them all that Magnus was in the building all this time.  So the info they just pulled up on Gregory, Magnus now had.  Michelle and Toby rushes to the address.

The look on Gregory’s face when Magnus came walking in the door was mere shock.  I thought to myself, “yep, he’s a goner.”  But it wasn’t Magnus who pulled the trigger.  For a split second Magnus let his guard down and Gregory got the gun away and pointed it at Magnus.  Or did he?  Magnus is not the type to slip up but in the end he got his revenge.  Magnus taunted Gregory causing him to squeeze the trigger.  It wasn’t until the last possible moment that Toby was able to see what Magnus had done to the gun.

Just as Toby shouted for him to not shoot, Gregory pulled the trigger.  It backfired and part of the gun was embedded into Gregory’s forehead.  Ouch!!  Well at least it was a quick death.

But Magnus is a character who has me so puzzled.  It makes me wonder if he knows about Toby’s talent somehow.  Well think about it.  Every time Toby has tried to get a reading from Magnus, you would see static or lightening.  It’s like Magnus only allows Toby to see what he wants to show him.  And when Toby spoke out loud that maybe he’s “thinking of another way to escape”, Magnus, in handcuffs, smiles back at Toby and thinks “it’s like you’re reading my mind.”  I hope we get to see him again in a future episode.  And where they are renewed for a season 4, we just might.

I want to thank the great people at Shaftesbury Films and Bell Media for giving us an awesome series to watch each week.  Bring on season four!!!

I wish to thank you all for popping by and reading my thoughts on this series.  Feel free to share this by clicking on the buttons below.  You can also leave a comment below or nab me on Twitter.