Welcome back.  Have I got a treat for you.

Some of you may know my next interviewee.  Others not so much.  He first got my attention when I seen him on back-to-back episodes of Sanctuary.  Then I found him on Twitter and I’ve been following him ever since.  OK, that sounded a little bit stalker-ish, but I’m harmless really, 🙂

His name is Fraser Aitcheson and he’s been very busy of late.  Besides being in Sanctuary, some of you might recognize him in Smallville, V, even Human Target.  The list goes on and on.  He’s been in such films as Night in the Museum: Battle of the Smithsonain.  A movie I just about know off by heart thanks to my son. LOL.  And Blade: Trinity.  Which I can’t get enough of watching.  It seems the more action packed the TV series or film, you’ll find Mr. Aitcheson.  Like I said, he’s got a long list of amazing TV and film credits.  And he’s not done yet.

KF:  For people just learning about you now, how about a bit of a bio?

KF:  On your IMDb site, you’re mostly listed as doing stunts, how did you get into that part of the entertainment industry?

FA:  I started in stunts back in 2001. at the time I was wrestling professionally for a couple of the independent circuits along the west coast. A TV show called ‘los luchadores’ came to Vancouver, and they needed to teach the stunt people how to perform some of the moves (ie: bodyslams, suplexes, etc). I was brought to help teach, and was given work on the show as a thank you. from that point, I was hooked.

KF:  I first noticed you in the two episodes of Sanctuary with the then WWE star Edge.  What was that experience like?

FA:  Coming from a pro wrestling background, I was really excited to have the opportunity to meet and work with Edge (Adam Copeland). He was super cool!

KF:  I’m guessing with doing stunts in any project that there’s injuries.  What, if any, mishaps have you had to endure?

FA:  I’ve been fortunate so far, and haven’t been injured too badly. It’s expected that bumps and bruises are possible given the physicality of stunt work. I accept that things could happen, but safety is always top priority. 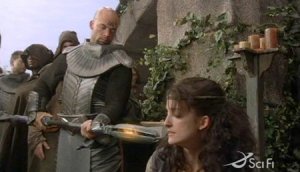 KF.  I also noticed on IMDb that you’ve done your fair share of acting.  Do you enjoy the acting more over the stunts, or are they more equal?

FA:  Because of the physical nature, I do enjoy stunts more, but acting is fun. I look at both as a privileged position – getting paid to have fun with friends, so I’m always just happy to work.

KF:  With your wide range of action movies you’ve been apart of, what one did you enjoy doing more?  Is there one you least liked?

FA:  I can’t say there has been one production that I’ve enjoyed more or less than another. Whether TV, or film I love working while wearing prosthetics. It just makes it seems that much more like being a kid at play! I did an episode of ‘Smallville’

where I got to play a villain named ‘the persuader.’ It was fun because it had all the elements for me: cool costume, acting and stunt stuff! Last year I worked on the ‘Mortal Kombat: Legacy’ web series as the character ‘Baraka.’ I really got into this one because I got to wear full facial prosthetics. i couldn’t even recognize myself in the mirror.

KF:  Who is/was your biggest influence in your life to where you are today?

KF:  Is there a motto you live by?

FA:  Excuses are plentiful and easy to find. Results take effort, that’s why their achievement is so gratifying.

KF:  You mentioned to me that you just worked on a film, Suffer.  Can you tell us about your character?  How did you get involved in this project?

FA:  ‘Suffer‘ was an independent film based on a short by Ryan Nicholson. Basically, I played a fighter whose opponents get served as dinner to the spectators of the fight. The writers are fellow stunt performers and they felt I had the perfect look for bad ass, fighter-type, killer. lol

KF:  Do you have any charities you either volunteer with or give to?  Or is there any that you’d like to get involved in?

FA:  Right now there aren’t any charities that I’m able to volunteer my time to because my free time is spent with my 1 yr old daughter, or doing work related stuff. In the future I think I’d like to talk to kids and help them realize that adversity (i.e. parents divorce) can be turned into positivity with focus and direction. I’m an example 🙂

KF:  Is there anyone you haven’t worked with that you would love to?

FA:  Working with any of the top names would be awesome! I do feel that every actor I’ve worked with has brought something that I’ve been able to learn a little from.

KF:  Let’s change things up a bit and find out what’s some of your favorite things…

FA:  I loved ‘The book of the Dun Cow’ by Walter Wangerin Jr. When I was younger. I’m a big comic book fan too. I still have my old comics, and just started collecting again digitally. Thank you iPad.

I love classic movies from the 80’s like ‘Big Trouble in China’, ‘Robocop’,  and ‘The Thing’ to name few. If those, or others like ‘Blade’, or ‘Conan: The Barbarian’ are on TV, I’m compelled to watch. For contemporary movies, I’m liking most of the films Marvel is producing. I loved shows like ‘District 9’, ‘Hancock’, ‘Black Dynamite’… I could go on for a very long time!

For TV, I’m a big fan of the Sunday eve cartoons – ‘Cleveland Show’, ‘Family Guy’, and ‘American dad’. when ‘Walking Dead’ and ‘Spartacus’ are on I follow those shows as well.

I wouldn’t say I have a favorite restaurant, I just like eating tasty food that I don’t have to make myself.

My fav music… I like a bit of everything except country. While training, I wear my iPod which has mostly metal.

My fav alcoholic drink would be Jack Daniels. With ice. Non alcoholic, I drink mostly water.

KF:  How did you get onto Twitter? And how are you liking it?

FA:  I started with twitter because I figured another type of exposure could only help. So far it has and I’m liking it!

KF:  What advice would you give someone wanting to get into this industry?

FA:  Anyone wanting to start a career in film I’d say be patient. There’s a lot of rejection, some disappointment, and sacrifice. It’s worth it in my eyes because its so much fun.

FA:  I don’t have an official website yet – I’m hoping to get started on one soon.

KF:  Do you have an address where fans could write to you?

FA:  Fans can write to me via email at fraseraitcheson@mac.com and I’ll respond as soon as I can.

Well, that’s it for this time.  Hope you all enjoyed the great read.  I loved every bit of it, even laughed in a couple of places. 😀

I want to thank Mr. Aitcheson tremendously for this opportunity to help get his name out there more then it already is.  It’s been a great Q&A and I appreciate you allowing me to interview you.

Thank you all for visiting IN THE KNOW.  You can share this by clicking on the buttons below.  And stay tuned for even more great things in the future.