Oh my gosh, where do I begin about yesterday?  Honestly, it was one of those very surreal days that during the whole time I was waiting for myself to wake up for the most awesome dream ever.  Not to the point that every once in a while I was pinching myself to see if this was real or not, LOL.  But it was and I was loving every minute of it.

I guess first of all I can start off by how this awesome day became a reality for me.  It all came about when I seen her tweet that she was coming here to film a guest role on Republic of Doyle.  I just about jumped out of my chair.  I know I screamed out, “OH MY GOD!!!”  I think I deafened a friend of mine on skype, lol.

Now you might be asking, “who was this person?”  Well it was Mylene Dinh-Robic.  She portrays Dr. Olivia Fawcett on the awesome TV show The Listener.  Yes the same show I write reviews on for WormholeRiders.  Plus she has an official fan page on Facebook.  So go there and LIKE her page.  Anyway, when I caught that, I was that excited that I asked her when was she coming in and if it was possible if we could hook up.  She openly tweeted that she’d love to meet up.  Well I literally got up from my chair and started dancing around my kitchen, LOL.

We had a few DM’s back and forth on the details and such.  Sorry, they are private, *giggles*.  But after many DM’s we were able to work out a time and day for our first (of many I hope) get together.

Which brings me to yesterday.  I was like a kid again, bouncing off the walls from a massive sugar high.  Should I go alone?  Would it be more fun if I took my family with me?  I really didn’t know how long I’d be if I did go alone and I knew that my hubby would be bored silly.  But then I remembered that The Listener done an episode on autism, so what better way to introduce her to Brett.  So the 4 of us ended up going.

Well we got the the meeting place about 10 minutes before were to actually meet up and I was so nervous, looking in every direction for her.  Paul (hubby) suggested that she could be in the lobby of the hotel that was there.  So I got out of the truck and ventured in that direction.  All the while my heart was racing, 🙂

The lobby itself was so busy, that I just kept looking about.  Done that for about a couple minutes and headed back to the truck.  Went around to the drivers side, didn’t see the point of getting back in, until Paul seen someone coming from the end of the parking lot.  I turned around and sure enough, it was Mylene!!

Now picture if you will; I in one part of the parking lot, Mylene in the other, and we running with arms up in the air to greet each other.  Funny or what?  What’s even funnier was that Paul had the camera in the truck with him and never took a picture.  LOL.

She seen that I came with my family, that’s when I told her that where they done an episode on autism, it would have been nice if she met Brett.  So we walked over to the truck (of which Paul was already standing outside) and I introduced her to everyone.  Paul asked her if she was on a time schedule, (curfew basically).  So she told us of what time she’d like to be back for, she had some things to do before she went to sleep, so that’s when he asked her if she’d like a meal of fish-n-chips.  Now who could pass that up? LOL.

That’s when we found out that she hasn’t really done any sight-seeing.  Other then to JOG UP Signal Hill.  I would have been crawling, LOL.  So I gave her my seat in the truck, and we took her to do some sight-seeing.  Though, we stopped at Tim Horton’s first, poor dear hadn’t had anything to eat yet, 🙂  So we treated her to that and headed off.

Along the way, there’s a big mural painted on the concrete wall.  So we pulled over (not saying where) and got out to get some pictures.

Of course every picture Denise wanted in on it too.  But it was good, she’s still talking about it and misses Mylene.  Sorry, there’s an ` that’s supposed to go above the first e, can’t figure out how to get it there.

But what impressed us more was the fact that some people who were driving by seen that we were taking some pictures and would stop and wait for us to finish a certain shot.  Though, sometimes we’d let some go as there were a line of them wanting off the hill.  Then there was one driver in a pick-up who offered to take a picture of the 4 of us together.  And I said 4 cause Brett didn’t want to get out of the truck at this point.  This is the picture that a kind gentleman took for us.

After the pictures were taken, we got aboard the truck again and headed off to Cape Spear.  I had planned on getting her a little something for our day out, but then Denise whispered to me that she wanted to get her something too.

First place Paul suggested we go is where the 2 cannons are.  One was still in the ground, the other above. 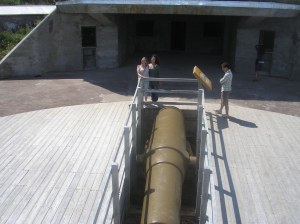 After lots more pictures taken, we headed back to the shop they have there.  That’s when Denise found a cute little white polar bear key chain she wanted to get.  I went to the bracelets.  After buying Denise’s 2 things and I buying 2 bracelets, we started off again.  We weren’t out the door of the store when Denise gave Mylene her little gift.  I waited, 🙂

This time Denise wanted Mylene to sit in the back with her.  It was so cute, so she got in the back with the kids, and started playing with their little toys.  I couldn’t help but to giggle.  She was having a good time, (least that’s what Paul and I kept hoping anyway).

That’s when I took the bracelet out of my purse and told her “I got ya a little something too.”  She was so touched and I thought I was going to cry.  She’s such an amazing person, really down to earth.  I was really enjoying my time with her.  I think Paul was having fun too.  And I really have to thank him as well, cause I don’t think it would have been as fun.  So thank you honey, you made yesterday a very memorable day for me.

But with all the pics we have of me and Mylene, I had to get one of her and Paul. 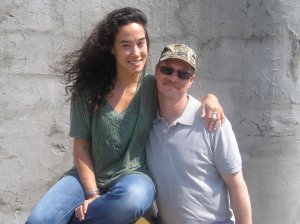 Before leaving, there were a couple pictures that needed to be taken.  That was to be standing on the most easterly point of North America.  Next stop – UK.  LOL.

When we left, we took a small detour and drove through Maddox Cove and Petty Harbour.  If you ever want to see a true fishing town, this was the place to visit and just see for yourself.

But the day is not over yet,, there’s still some trees we needed to climb, LOL.  Yes, I said a tree.  Inside joke now going to be made public.  See Mylene tweeted that she was tempted in climbing a big maple tree but wasn’t sure if she should.  So since then I kept asking her if she’s climbed any trees lately.  To my surprise and much laughter, she sent me a twitpic of her UP IN A TREE!! LOL.  It was so funny that she actually done it.  So when I asked her in an open tweet that maybe we could get a picture of 2 nuts in a tree, she was all for it.  So here’s the end result.

However, prior to the tree climbing escapade, we went to Lester Farm’s first.  Needed to get the right kind of potatoes for our meal.  And let me tell ya, I was so nervous.  Mainly cause we were still in renovating the house, was afraid for things being out of sorts.  Denise asked her if she wanted to see her room, bless her, she was having such an awesome time with Mylene, I just hoped she was too.

So I started straightening up a bit while Paul started on our dinner, fresh pan fried cod fish, homemade seasoned chucked potatoes, and carrots in butter and brown sugar.  She loved it.  Afterwards she asked me if I had any questions for her about The Listener.  I managed to write a couple down, but I didn’t want to turn today into an interview.  I was asking her little bits throughout the day, so I could put those together for a write up for that.  But I do have an idea to run past her when she has some free time.  Then we can do it right. 🙂

Unfortunately the time had flew and we actually had her for longer then she suggested.  So we drove her to her place where she’s staying and said our good-byes.

What an amazing day.  I loved every minute of it.  As I was writing this and had one of our pictures up, Brett stuttered a bit and said her name.  That was a wow moment let me tell ya.

Thank you Mylene for an amazing day.  One that I’m sure I’ll talk about to anyone who will listen, LOL.  Love you loads, xoxo

Hope you all enjoyed experiencing my exciting day with me all over again.  Not sure if anything else I will write will be just as exciting, but my life is anything but dull.

Until next time, you can always catch me on Twitter.

I’m not really sure how long I’ll have this layout for, but for now, it will do.

Well today is Monday, April 4th and it’s not long before I’ll be going to the 5th Scifi on the Rock convention.  Though this time, I have my own workshop – Everything Stargate.  And what a privilege it will be too.  This will be my first time having such an opportunity, and to tell ya the truth, I’m a tad nervous and scared.  I don’t do crowds.  Let alone stand up in front of a room with all eyes on me.  I just hope that I pull it off alright.

However, I will be there as part of the WormholeRiders News Agency as well.  Reporting from the convention floor, asking other fans why they come to this event every year and such things.  However, my initial report will be posted over at WHR.  And you can follow them on twitter to get the updates I’ll be posting over there.  So for anyone interested, that’s where you’ll have to read all about it.  Unless you wanna catch me on twitter.  I live over there, lmao.

Anyway, that’s it for right now.  I’m sure I’ll have more to write about as the day progresses.  Until then, hope you all have a great day.

2 Comments   |  tags: Scifi on the Rock, WormholeRiders News Agency | posted in About