I have to start this off by the reason for this title of the blog.

See, last week CTV Television was having a Tuesday Trivia on twitter about The Listener.  There were 5 questions in total.  I answered 4 of them as I didn’t see the last one being posted.  But low and behold, I actually won the prize.

And again, I didn’t know there was a prize involved until another tweeter I follow had told me.  I then told her that I doubt I’ll win cause I missed a question.  But a few hours later, in my DM, I received a message that I had indeed won.

So here’s what I got in the mailbox this morning!!! 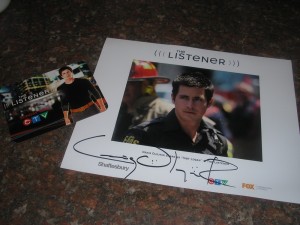 An autographed picture of Craig Olejnik and a magnet as well.  Thanks CTV Television.  I love it. xoxo

This entry was posted on Wednesday, August 24th, 2011 at 11:41 am and tagged with Craig Olejnik, CTV, The Listener and posted in Updates. You can follow any responses to this entry through the RSS 2.0 feed.
« Another hectic but fun day.
Another Awesome Day!!! »

One response to “Very cool surprise!!!”